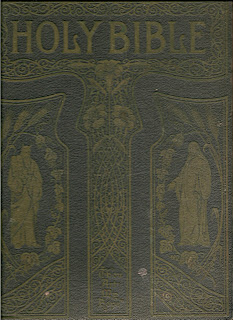 I posted this a while back, but I want to re-post it because I found more information about this family and want to add it.

I found a wonderful family treasure at the Flea Shack in Middleburg this last Saturday. It is a 20th century self-pronouncing edition beautifully illustrated family Bible published by A. J. Holman Company in Philadelphia. It doesn't give an actual publication date, but I am guessing it was published between 1910 and 1930.

I believe the bible belonged to Georgia P. Sloan.


The birth records are listed as follows:

The following are marriage records listed:

The following are death records:

On the next page it says:

I was able to find Georgia's obituary:

Florida Times-Union, The (Jacksonville, FL) - May 31, 2006
Deceased Name: Georgia Powell Sloan
FL United States SLOAN Funeral Service for Mrs. Georgia Powell Sloan will be held 10AM, SATURDAY, June 3, 2006 in Woodlawn Presbyterian Church, with Dr. J.W. Rigsby, Pastor, officiating. Mrs. Sloan of 8736 Harpers Glen Ct. passed away May 28, 2006. A Rocky Point, NC native she was a graduate of Elizabeth City State University (NC) with a BS degree in Education and a Masters Degree from North Carolina A&T State University, also in Education. She participated in numerous post graduate studies in Education from Jacksonville University and the University of North Florida. As one of Duval County's Outstanding Educators, Mrs. Sloan was employed by Duval County School Board until she retired in 1994 after 36 years of dedicated service. Other affiliations include member of the Centurian Club, Zeta Phi Beta Sorority, Inc. - Beta Alpha Zeta Chapter, and served Woodlawn Presbyterian Church as Deacon, member of the Christian Education Committee, Celestial Bell and Chancel Choirs, and the Seniors and Retirees Organizations. Mrs. Sloan was predeceased by her husband, James M. Sloan, Sr. Survivors include her daughter, Mrs. Gwendolyn F. Dickinson-Sewell (Robert); son, James M. Sloan, Jr.; grandsons, Jarian J. Dickinson and Brandon J. Dickinson; great-grandson, Jariq M. Dickinson; great-granddaughter, Adaijah J. Dickinson; a number of other relatives and friends. Mrs. Sloan will rest in the mortuary for visitation of friends FRIDAY from 5PM until 7PM (where the family will receive friends at 5PM) and in the church Saturday from 9AM until the hour of service. Sorority Rites will be Friday in the chapel at 7 PM. Interment will be in Chapel Hill Memory Gardens Cemetery, 850 N. St. Johns Bluff Rd. Friends are asked to assemble at the church under the direction of ALPHONSO WEST MORTUARY, INC., 4409 Soutel Dr., 904/766-9671. Please Sign the Guestbook @ Jacksonville.com
Florida Times-Union, The (Jacksonville, FL)
Date: May 31, 2006
Record Number: 17949804
Copyright (c) 2006 The Florida Times-Union

Below are the death certificates of George Powell and his mother Alice. 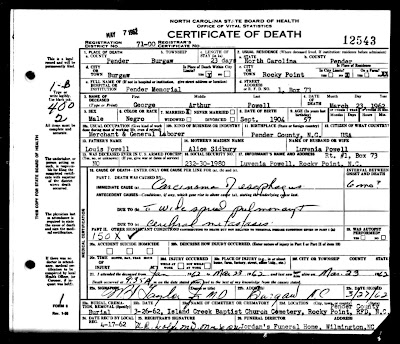 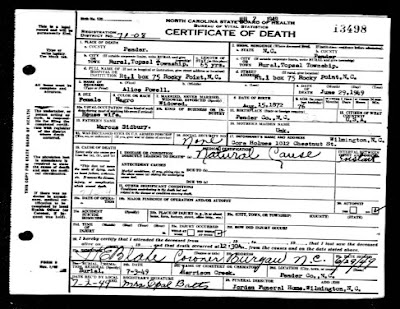 Below are Census images that I found on family members listed in the Bible.

I AM HAPPY TO SAY THAT THIS LOST FAMILY TREASURE HAS NOW BEEN FOUND. IT IS ON ITS WAY TO A FAMILY MEMBER!