Here we have a couple of newspaper articles and three photos from little John Meek's fourth birthday partiy. Unfortunately there is no date on the articles or any indication of the name of the newspaper, but we do know it is the Jacksonville, FL area. The year was probably 1922. It is also unfortunate that there are no names written on the back of the photos to indicate who is who, however some of them are mentioned in the articles. 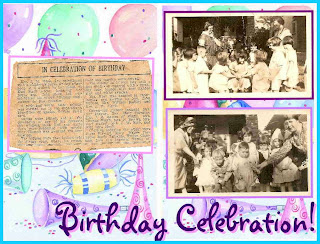 IN CELEBRATION OF BIRTHDAY

A pink and white color scheme
was carried out in the decorations,
quantities of garden flowers being
used.

Games were played, and at the
conclusion of one of the contests
the winners, Jack Neff and Anita
Geer, were presented with prizes.
Billy Thomas was awarded the con-
solation.

The kiddies were then invited into
the dining room, where ice cream,
cake and candles were served.
The dining table was laid with a
lace cloth and centered with a birth-
day cake, topped with four lighted
pink and white candles.

(The rest of the article is missing.) 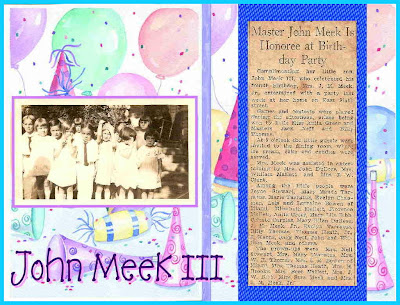 Games and contests were played
during the afternoon, prizes being
won by little Miss Anita Greet and
Masters Jack Neff and Billy
Thomas.

At 5 o'clock the little guests were
invited to the dining room, where
ice cream, cake and candles were
served.