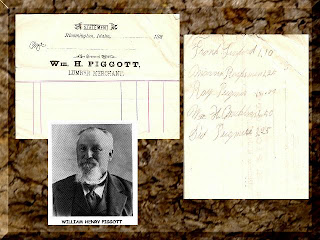 Here is yet another goody from great-grandma's stuff. It is part of a ledger for his lumber business and some account information written on the back.

William was listed in the E. L. Sloan & Co. 1874 Salt Lake City Directory as a sawyer. He held the position of buyer. He always went to work wearing a white linen suit which was starched. It was so starched that it could stand alone.

He measured the logs and decided how each one should be cut and how many board feet should be credited to the men delivering the load.

Sometime before 1880 church authorities requested him to go to Liberty, Idaho and set up a saw mill to furnish lumber for the people of the Bear Lake area. William and his family lived in Liberty, Idaho for three years until he moved the saw mill to Bloomington, Idaho.