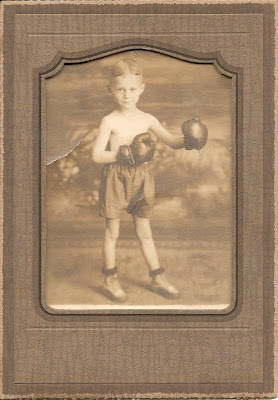 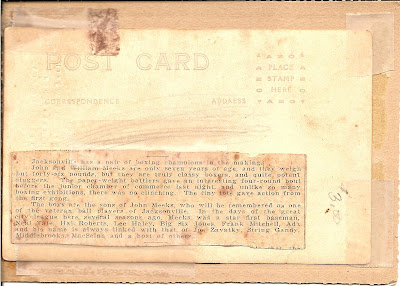 Here is another lost Meek family treasure. This precious photo is actually on a postcard. There is a small newspaper article taped to the back.

Jacksonville has a pair of boxing champions in the making.

John and William Meeks are only seven years of age, and they weigh but forty-six pounds, but they are truly classy boxers, and quite potent sluggers. The paper-weight battlers gave an interesting four-round bout before the junior chamber of commerce last night, and unlike so many boxing exhibitions, there was no clinching. The tiny tots gave action from the first gong.

The boys are sons of John Meeks, who will be remembered as one of the veteran ball players of Jacksonville. In the days of the great city league here several seasons ago. Meeks was a star first baseman, Neal Tate, Hal Roberts, Lee Haley, Big Six Jones, Frank Mitchell, Ada, and his name is always linked with that of Joe Zavatky, String Gandy, Middlebrooks, MacSelph, and a host of others.

I have not been able to find anything else indicating that John Meek II was a baseball player.