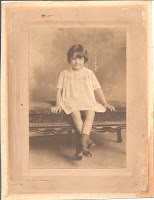 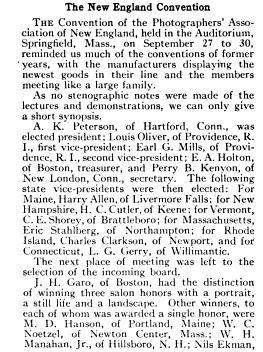 I found this photo of cute, little Avis Anderson at the Ramona Flea market in Jacksonville.

The picture was taken in June of 1930 by photographer Louis Oliver of Providence, Rhode Island. According to the 1930 census she was seven years old when this photo was taken.

Louis was elected first vice-president of the Photographers' Association of New England.

The above article about him is from The Photographic Journal of America, Vol 57 at Google Books:.

Here is little Avis with her family in the 1930 Census:

I just found her obituary and she has only been gone about a month.

Born in Providence, she was the daughter of the late John A. and Mary (Wynkoop) Anderson. Avis was a registered nurse for over 30 years before rtiring from Rhode Island Hospital in 1972.

Her funeral and burial were held Wednesday at Sprig Vale Cemetery in Rumford.

Frank P. Trainor and Son Funeral Home
It looks as though she never married. I hope there is some family member out there who would appreciate this photo.


*Update - This lost family treasure has now been found!