Today's treasures I have pulled from grandma Hazel's stuff and want to share them with you before I send them on the road to my latest cousin connection, Fran.  Actually, Fran is a treasure all in herself.
I was going through all of my Madsen & Piggott information and I found a copy of a typed history of my Madsen great-great grandparents.  There was no citation or note as to where this history was copied from or when.  Luckily however, there was a notation at the bottom stating who wrote the narrative; Frances (Madsen) Towle.
I knew that name. She is the daughter of grandma Hazel's brother Franklin Madsen.  So I took the chance in searching for her phone number and I actually found it.  I dialed the number and her son cut off the answering machine when he answered.  She wasn't there, but I explained who I was and he said he would have her call me. I thought "cool".  This was July 1, 2010.
Later that day she called me and was quite excited, as was I.  I guess the answering machine had recorded my conversation with her son and that is how she got my number to call.  The crazy thing is that she had been trying to get a hold of me for quite a while.  She said she Googled someone and up popped my blog post Surname Saturday -- Bake, she said to herself, "I think that's my grandmother's father".  She had tried to call other Piggott relatives to try to find out who I was and how to contact me, but was unsuccessful and frustrated.  I think we both decided that this was 'divine intervention', if you will.
So my great-grandma Piggott is her aunt Hazel and they were very close. It's kind of weird, I have never heard anyone call her "aunt Hazel"  before.  I don't know quite how to explain it, but this new connection makes me feel closer to grandma Hazel as if she brought us together herself.
Check this out:
Anyway, these postcards were sent to grandma Hazel from her brother Frank Madsen, who is Frances' father.  He was about 10 years old when he wrote the first one, and 13 when he wrote the other.  I feel that these particular postcards should be in her family so I am sending them to her. 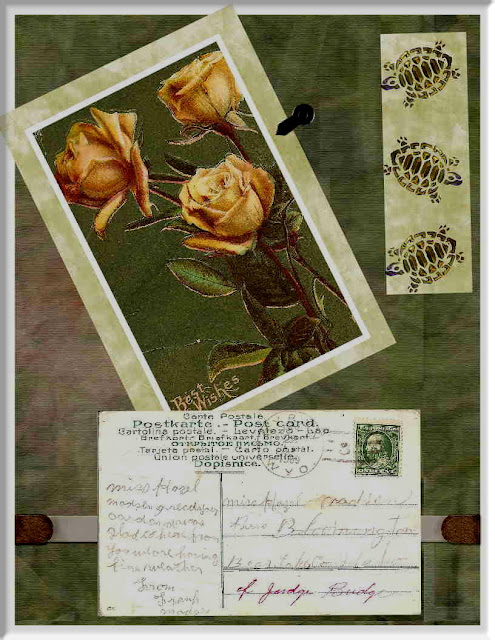 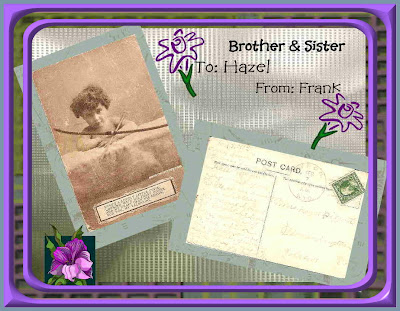 Feb 5, 1912
ans. soon
From Frank
Hello Hazel.
Why don't you
write. We are having
fine weather.
Olie came home
to night he has
been working
on the ditch
Roie was down she
went back yesterday
Vida has gone
to Cody to work.