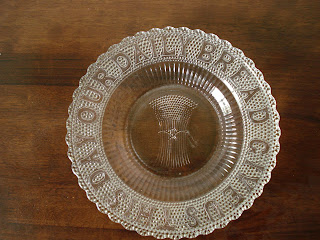 Although these items have never been in my immediate family and I have never actually seen or touched them, they still mean something to me because they are Piggott family heirlooms.

This bread plate and soup terrine were among the possessions that my 3rd great-grandmother packed up to take with them on their long journey from New Bedford, Massachusetts to the Salt Lake Valley in 1853.

April 18, 1853 George Washington and Catherine Allen Howland Piggott along with children, Abbie Ann, William Henry, and Rowena Allen left their home in New Bedford, Massachusetts and took the 3 o'clock train to New York City to visit with George's mother and surviving siblings before they moved out west.

After visiting with the family for a few days they left New York City on a train to Portland, New York where Captain Jesse W. Crosby was waiting for the saints to arrive. They  boarded a steamer that took them to Keokuk, Illinois.  Once in Keokuk they were outfitted with a wagon and cattle and made the rest of the journey with Captain Cyrus Wheelock.  They lost little Rowena to smallpox and she was buried out on the prairie June 7, 1853.  They arrived in the Salt Lake Valley between the 6th and 16th of October 1853.

The heirlooms were handed down to Abbie Ann Piggott, then to her daughter Abbie Rowena Slater, and on to her daughter Abbie Ann Johnson.  Their families have graciously donated these artifacts to the DUP's Pioneer Memorial Museum in Salt Lake.  The pictures are courtesy of cousin Cindy (thanks cuz!)
Hopefully one day I can go there and see them for myself.