When I came back from my visit to Idaho last May I was able to fit a few things in my suitcase that had been stashed in boxes down in mom's basement for let's see, seven years now. One of those things was this precious treasure: 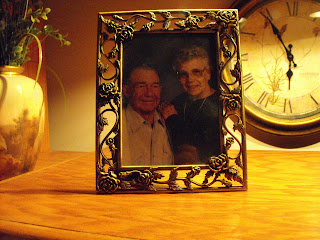 The frame is pretty and all, but the true treasure is the warm and fuzzy lookin' guy inside the frame. I call him grandpa Marv.
Grandpa Marv and grandma Marge gave this photo to us for Christmas one year. They aren't "related" to me, but he was my grandpa in every way that counts.  We kind of adopted each other around 1997.
Hubby never had a positive male role model growing up and grandpa filled that hole till it was overflowing. I was only fortunate to know one of my real grandfathers. I did share some moments with him, but not as much as I liked.  I think the older grandkids got the best of him.
No matter what was going on in my life grandpa Marv would always be there for me and hubby. We spent so many wonderful times fishing, camping, and getting together for the holidays. But, the best times were when we just went down to hang out and visit at their house, which felt like home to me.
I was reading through some of my journals and found some entries about him (a search button sure would have been handy!)and I wanted to share them with you.

Monday, Oct 27, 1997
I am not in the best of spirits today. Grandpa Marv had a heart attack yesterday...
I went to see him today...
Grandpa seemed to be doing alright. It was hard to see him like that -- hooked up to wires and tubes in his nose. I wish he would quit smoking!

They are going to do an angiogram in the morning. I was looking in the gift shop while I was up there, and I saw the cutest little thing. I just had to get it for him. It was a stuffed toad all dressed in fishing clothes and holding a fishing pole with a fish on the line. Grandpa is my fishing buddy you know.

August 14, 2001
It was just after 9 when I got home from work last night and noticed from the caller id that grandpa Marvin called.  I called back and it was hubby saying that grandpa wasn't doing so good and that I should come down and see him.
They had just taken all the ivs out of his arms and I believe today or tomorrow they are going to unhook him from the oxygen per his request.
I got right in the car and went to grandma's. Grandpa was lying in his bed. I sat down by the bed and held his hand and squeezed.  He opened his eyes and said, "Did you get your teeth fixed?"  I told him,"Yes, I sure did."
He was on his pain medication so he was sleepy. His stomach is so bloated, and it is so hard for him to breath; even with the oxygen.
It was so hard to see him like that - my sweet old honey grandpa lying there helpless.  He is ready to go, I know.  He is tired of being a burden (not) and just can't take anymore. I understand, but I just can't bear the thought of losing him.
I told grandpa I loved him and kissed him on the mouth and we went home.

Idaho State Journal, 08/20/01
POCATELLO ID Marvin Daniel Whitworth, 73, passed away Saturday, August 18, 2001, at his home after a lengthy illness. Marvin (Marv) was born on June 18, 1928, at Inkom, Idaho, to Francis (Frank) and Katheryn O. Whitworth. He grew up in Chesterfield, attending school in Inkom, Bancroft and Pocatello.

On October 6, 1950, he married Margaret (Marge) A. Valentine at Chesterfield, Idaho. He ranched in the Chesterfield, Eight Mile, south of Soda Springs, and the Doc Newton Ranch on Marsh Creek Road. He began employment for Idaho Portland Cement (Ash Grove) in 1957, became a foreman until his retirement in 1991.
Marvin and his wife, Marge, had a race horse training business from 1969 until 1984. He enjoyed hunting, fishing and summers with his family and friends at his retirement home located at Cedar Bay Marina, Henry, Idaho.
He is survived by his wife of 50 years, Marge, Inkom; four daughters, Terry Lish and Marilyn Brown, both of Inkom; Jackie (Dennis) Davis and Marian (Marvin) Shappart, Pocatello; three granddaughters, Leslie (Dan) Bull and Totonka, Sharlene Gonzalas and Kim Jones; three grandsons, Spencer, Terry and Troy (Teresa) Davis; three great-grandsons, Andrew, Anthony Gonzalas and Kyle (Powers) Davis; his father, Francis (Frank) Whitworth, Inkom; sisters, Darla (Jud) Tolman, Portland, Oregon; Iris (Gordon) Bernier, Inkom; brothers, Arden (Norma) Whitworth and Albert (Karen) Whitworth, all of Inkom. He also is survived by numerous nieces and nephews and his honorary family of Robbie and Margurite Davis of New York.
He was preceded in death by his mother, Katheryn; and a brother, Steven Whitworth; grandsons, Juston D. Corson Whitworth and Heath A. Lish.
Funeral services will be held Wednesday, August 22, 2001, at 2 p.m. in the Inkom L.D.S. Church with Bishop David Hunt of the Rapid Creek Ward conducting.
The family will receive friends from 7 p.m. to 9 p.m. Tuesday evening at the Henderson-Cornelison Funeral Home, 431 North 15th Ave., Pocatello, and also at the church from 1 p.m. until service time. He will be laid to rest in the Inkom Cemetery.

I wrote this poem and put it on two different backqrounds, one for grandma and one for me. 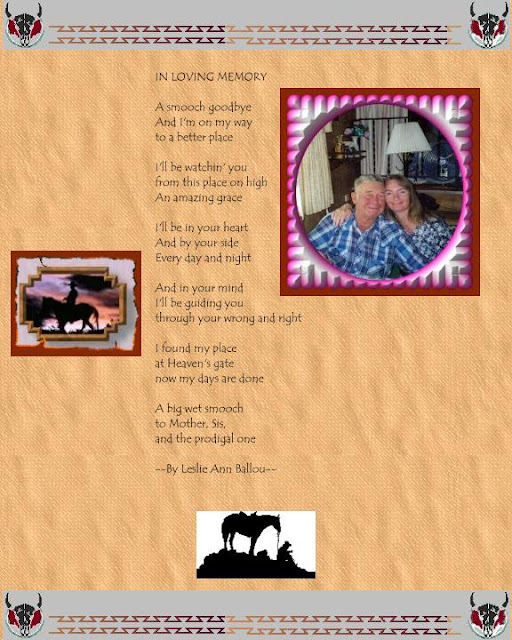 I have been thinking of him for two days now and I am about out of tissues.