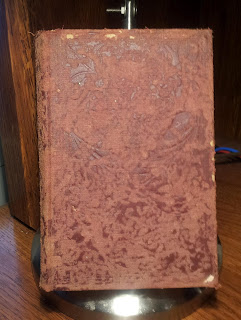 A couple of weeks ago hubby and I went to the Ramona Flea Market and my eye spied this old book.  For a book to get my attention while walking up and down aisles in a flea market it has to look old.

If I buy a book from a flea market or antique store, it has to meet just one of the following criteria: 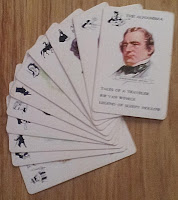 This particular book fits three of those categories.  It's (way) older than me, It has inscriptions, and it's included in the game Authors.

May I introduce you to THE ALHAMBRA, by Washington Irving.  It is an author's revised edition published by The Henneberry Company in Chicago. This publishing company was in operation as The Henneberry Company from 1901-1907.  This particular book was from one of many series that they published.  You can get an idea of what the book originally looked like from the Tom Brown Series. 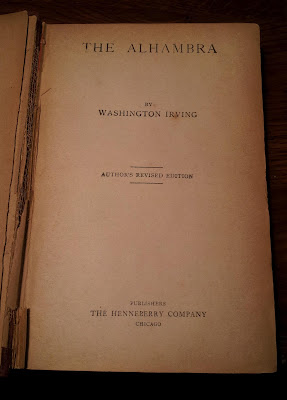 Since the original owner dated this book 1904, I estimate it was published sometime between 1901 and 1904.

There is also an inscription on the inside front cover probably from the person who gave it to her.  Unfortunately some juvenile neanderthal took it upon himself to write a vulgar rhyme underneath.

I also found her marriage certificate:
And lastly, I found her burial information:

My main objective is to get this book in the hands of a descendant of Phillip and Lena Doerfler Jacobs.  In the mean time, this book would be great for story time.

*Update - This book is now in the hands of a grandson of Phillip & Lena Doerfler Jacobs.