If you missed my first post about the Bishop/Carey photos, you can read it here.


I have also located the Bishop family in the 1930 Manhattan Census.

There is only one photo on this page that is labeled.  I am not positive, but I think the handsome looking gentleman in the suit is Shelton Bishop, Jr. 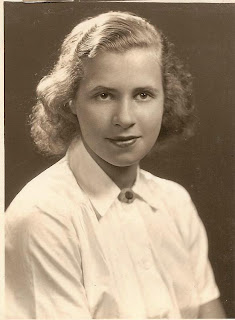 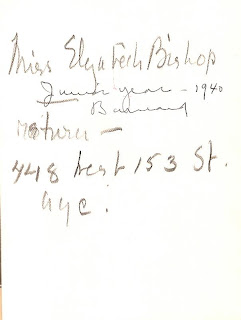 Apparently this photo was taken while she was a junior at Barnard College. Elizabeth  was a graduate of Barnard College and received her M.D. from the College of Physicians & Surgeons, Columbia University, in 1949.  Elizabeth passed away last year in February.  There was an article about her death in Harlem World Magazine.


It took me a while to find an actual obituary for her, I guess because she used different names. I also found notes of condolences. I now know that she has descendants so hopefully I will be able to make contact.


TRUSSELL , ELIZABETH DAVIS--Elizabeth Davis, professionally known as Elizabeth B. Davis, MD died on February 1, 2010 at the age of 89. She was professor emerita of Clinical Psychiatry at Columbia University and was the founder of the Department of Psychiatry at Harlem Hospital Center which she directed for 17 years. She was the daughter and granddaughter of two rectors of St. Philip's Episcopal Church in New York City. She became the widow of Ray E. Trussell, MD of New York City after 32 years of marriage. She is survived by a brother Shelton Hale Bishop, Jr., a daughter Liberty M. Rashad, three grandsons, six great-grandchildren, one nephew, two stepdaughters Margaret Hardy and Susan Stedman, their families and a host of other relatives and friends. Funeral services will be held on Wednesday, February 10th at St. Philip's Church, 204 West 134th Street, NYC. Viewing at 10am, service at 11am. In lieu of flowers, we are requesting that donations be made to the NAACP Legal Defense Fund in her name.

TRUSSELL , ELIZABETH DAVISTRUSSELL--Elizabeth Davis, MD. The entire Beth Israel Medical Center family acknowledges with sadness the passing of our beloved friend and colleague, Elizabeth Davis Trussell, MD, an honorary member of the Beth Israel Board of Trustees and widow of the former head of Beth Israel, Ray E. Trussell, MD. Elizabeth was a distinguished member of the medical profession, serving for 16 years as Chairperson for the Department of Psychiatry at Harlem Hospital as well as serving on the teaching faculty at Columbia University College of Physicians & Surgeons. She continued to remain involved at Beth Israel up until her death. She will be greatly missed by all who knew her and loved her. To her daughter, Liberty, the entire Trussell family and all of her loved ones, we extend heartfelt condolences. Lawrence S. Huntington Chairman, Board of Trustees Harris M. Nagler, MD Interim President Robert G. Newman, MD President Emeritus Louise M. Klebanoff, MD President, Medical Board.

TRUSSELL , ELIZABETH DAVISTRUSSELL--Elizabeth Davis, MD. On behalf of three generations of our family that had the privilege and pleasure of knowing Beth, we express our great sadness at her passing. She and her late husband Ray will always be remembered with profound admiration, gratitude and love. Our deepest sympathies to Beth's family and to her many friends and colleagues. Bob and Seiko Newman.

TRUSSELL , ELIZABETH DAVISTRUSSELL--Elizabeth Davis, M.D. The Columbia University Center for Psychoanalytic Training and Research and the Association for Psychoanalytic Medicine mourn the loss of our distinguished colleague, Elizabeth Davis, MD. A pioneering psychiatrist, she served the community of Harlem for many, many years as a gentle, caring psychiatrist and long time Chair of Psychiatry at Harlem Hospital. Respected by all her colleagues for her expertise and her values, she had great influence in community psychiatry and psychoanalysis. We extend our heartfelt condolences to her family. Eric R. Marcus, M.D. Director CU Psychoanalytic Center Jules Kerman, M.D., Ph.D. President, APM.


I was also able to find some magazine articles about Dr. Elizabeth Bishop Davis reporting on her success as well as her marriage.

There are also a couple of articles about her in the Columbia University Journal. Once you are there just run a search using the term "Trussell".
What an outstanding member of society this woman was.

Posted by Leslie Ann at 5:55 PM 2 comments: Links to this post

This last weekend hubby and I hit the Ramona Flea market in Jacksonville.  I found an old photo album full of photos.  It wasn't until I got home and really examined it and spent some time on Google did I discover just how important this family photo album could be.

I am not sure which family member owned the album or how it ever got separated from family members, but I hope to find some living descendants.


Rev. Bishop was the fifth rector of  St. Philip's Church in Harlem, the second oldest black congregation in the Episcopal Church. He was a driving force behind founder, well-known psychiatrist Frederic Wertham, in the establishment of  the Lafargue Clinic in 1946. It was housed in St. Philip's providing counseling and psychotherapy for Harlem residents at a cost of 25 cents per visit. It was the first mental health clinic in the world to serve people of color. It operated from the end of WWII until the 1960s when Elizabeth Bishop Davis, MD, a volunteer at the clinic and daughter of Rev. Shelton Bishop, became the first Chief of Psychiatry at Harlem Hospital. 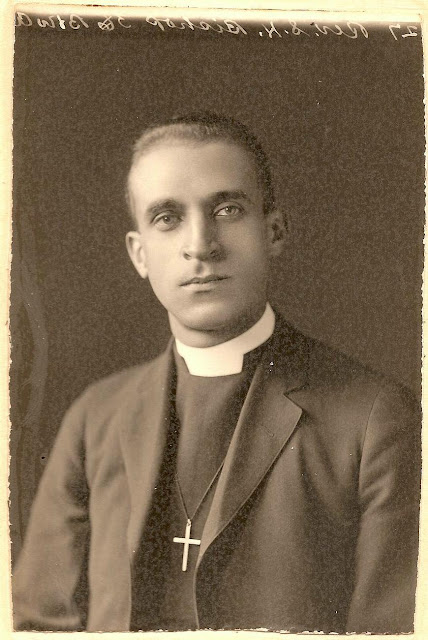 Rev. Bishop was married to the sister of Rev. Archibald Carey. After today I will post one page at a time and share what I have learned about this family.

This is the third and final postcard I have written by the mysterious Jane. 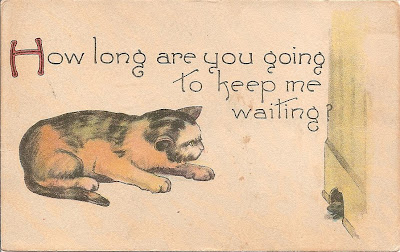 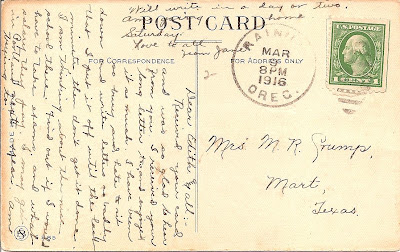 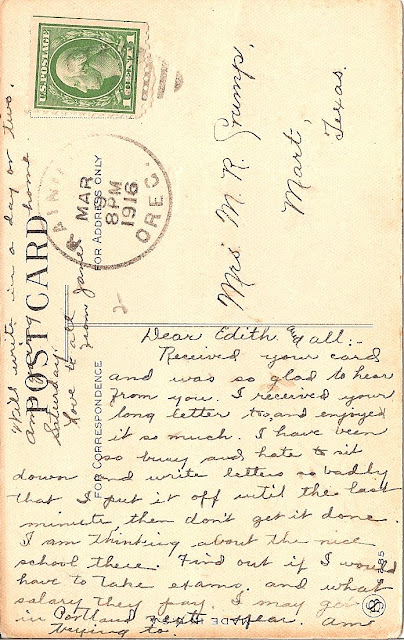 Dear Edith and all:-
Received your card
and was so glad to hear
from you. I received your
long letter too, and enjoyed
it so much. I have been
so busy and hate to sit
down and write letters so badly
that I put it off until the last
minute, then don't get it done.
I am thinking about the nice
school there. Find out if I would
have to take exams and what
salary they pay. I  may get
Portland next year. Am
trying to.
Will write in a day or two.
Am going home
Saturday.
Love to all
from Jane