Postcard from the Islands, Inverness 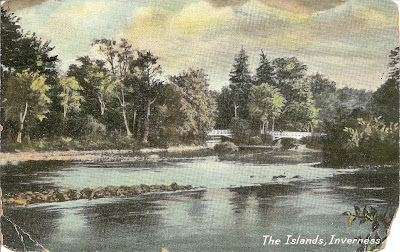 I found this postcard in one of Jacksonville's antique stores. The Islands, Inverness  is in Scotland I just found out.

Unfortunately there is no date or postmark so I'm not sure when it was delivered, or if it even was. It's addressed to Mrs. Chas Caine, 67 Westland Ave, Boston, Mass. 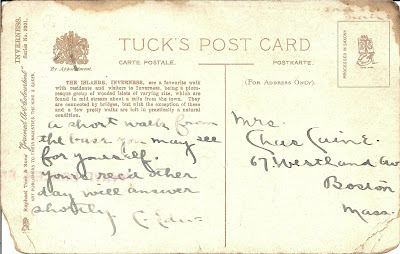 A short walk from
the base you may see
for yourself.
yours rec'd other
day will answer
shortly.   C. Edw.


The mention of a base made me think that the mysterious C. Edw. must have been a military man. I did a little searching and discovered that Inverness was used by the US Navy during WWI as part of the laying of the Northern Barrage. This might put a date on the postcard.

I haven't been able to figure out who Mrs. Chas Caine is either.

If you recognize these names as being in your family, as always drop me a line.


Leslie Ann
Posted by Leslie Ann at 3:47 PM No comments: Links to this post

Friday's Faces From the Past ~ Three Georgia Ladies 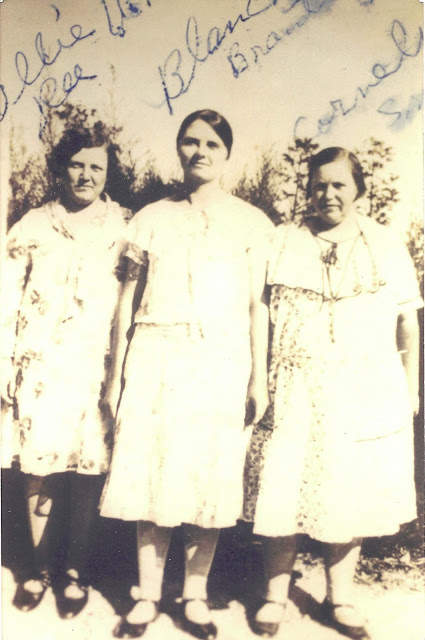 I found this photo a while back while wandering through an antique store in Jacksonville. This picture is obviously a photocopy. You can tell by the way the names are chopped off on the top. I can tell because I am holding the photo and it has clearly not been written on.

Aside from this label that is stuck to the back of the photo, I have had a rough time trying to figure out just who these women are.

The only thing I have been able to discover that ties them together is that they all lived in Jackson, Laurens County, Georgia.

I have just discovered that Miss Cornelius may be the key to their connection. Cornelius and family were living just nine houses away from baby Blanche and her grandparents in the 1910 Jackson, Laurens, Georgia Census. In the 1930 Census the Underwood family is living next door to Cornelius's mother-in-law Mollie Dudley.

So are these ladies just childhood chums, or are they related somehow?  Could Cornelius Smith have been named after Ollie's father? Curious minds want to know.

Posted by Leslie Ann at 5:23 PM No comments: Links to this post