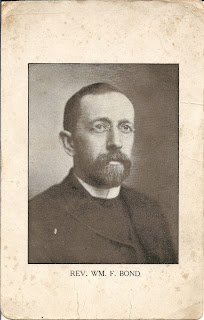 This photo of Rev. Wm. F. Bond was one of the photos that was in the "create your own ancestors" basket.

It's not a normal photograph. It is printed on card stock and looks like it may have been made for a publication of sorts.

From what I have been able to find out about the Reverend he was one of the oldest members of the Lutheran ministry.

His obituary is as follows:


One of the oldest members of the Lutheran ministry, Rev. Dr. William F. Bond of Shamrock, died at his home Sunday evening in his 83rd year. He has been pastor of the Bowers-Longswamp Lutheran parish in Berks county for the past 40 years. Born in Greenwich township, Bucks county, he was the son of the late Edwin and Catherine, nee Stump, Bond. He entered Kutztown State Teachers college in 1880, then went to Muhlenberg college, from where he was graduated in 1888. In 1891 he was graduated from the Mount Airy Lutheran Theological seminary in Philadelphia and on May 26 of the same year was ordained in the Emmanuel church at Pottstown. He served as pastor of St. Paul's church in Orwis from 1891 to 1904. In the later year he was called to the Bowers-Longswamp parish, which he served until his death. In 1941, in recognition of his 50 years in the Lutheran ministry, Muhlenberg college conferred upon him the degree of doctor of divinity. Surviving are six daughters: Mrs. Frank Deisher of Fleetwood; Mrs. Samuel Welch, Coplay; Mrs. Paul Steininger, Monessen; Mrs. Theodore Breisch, Reading; Mrs. Ira Guldin, Kutztown, and Mrs. Paul Musselman, Cranford, N.J.; three sons, John A. Bond, W. Leesport; Paul Bond, Topton, and Ivan Bond, Bally; two sisters, Mrs. Mary Long, Kempton, and Mrs. Agnes Wildermuth, Auburn; 34 grandchildren and 13 great-grandchildren. His wife, the late Katie E., nee Krebs, Bond, died in 1941. Revs. Emil Fischer of Philadelphia, Mark W. Trexler of Laureldale and C. E. Keiser of Lyons will officiate at services at the Longswamp church on Thursday at 2 p.m. Interment will be in the adjoining cemetery.[The Morning Call, Allentown, PA, Tuesday, June 20, 1944, page 5]

I have found his Find A Grave memorial and am going to upload the photo there.

If you are a descendant of Rev. Bond and would like to have this photo, please contact me. My email link is on the side bar.