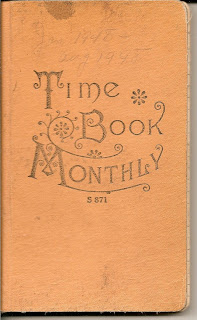 I was walking through the Bargain House of Fleas in Jacksonville one day and I found this interesting little book. It is a monthly time book to keep track of payroll. It is dated Jan 1948 to Aug 1948. Sadly, there is no indication of the name of the company. There is however something written up in the top right corner that has faded over time. I can't make out what it says, but it's possible that it could be a company name.

Without the name of the company I can't really pinpoint its location or anything about the workers.

Below is a list of the employees and their occupation as they appear in the book.

If you believe any one here is a relative, I will gladly look up the time and rate of pay if you wish. Also, if you know what company this time book is for and where it was located, I would appreciate it if you would let me know.
Posted by Leslie Ann at 9:03 AM