Among the goodies that grandma Hazel saved I found this single sheet of paper with her handwriting on both sides.  It is a little history about her parents and grandparents and some of her own recollections. 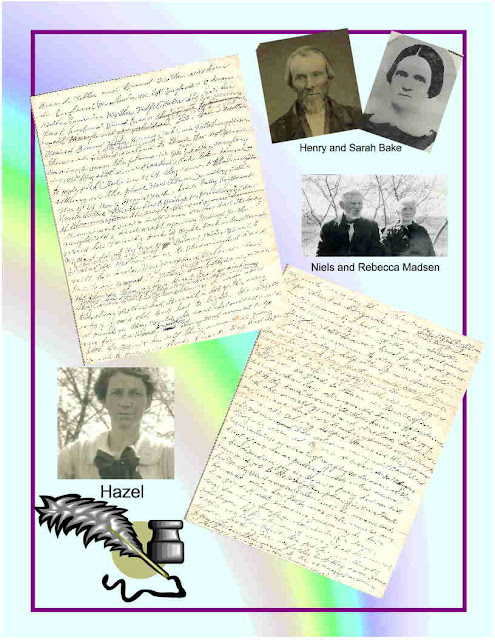 I was real intrigued when I read this because in all the family histories I have read, no one in the family has ever talked about interactions with Indians.  This may even be part of a draft that is typewritten somewhere in the possession of some distant cousins.  There could even be more of this in someone else's share of her stuff.
There is no particular format to this history, not even punctuation so I transcribed it as best as I could to make sense.

Grandfather was born in Manchester, England (other sources say Bollington) 1826 and left England in 1839 (or 1849). Grandmother [was] born in Merthyr Tydfil, Wales. She lost her first husband David Evans in 1849.  They had four children. Later grandmother  married grandfather Henry Bake in Pittsburgh, Penn.  There was six children born to them.

They left Pennsylvania coming across the plains in Mr. Ira Eldridge Company in 1861. They settled in Goshen, Utah, later they went to Hyde Park, Utah. In 1864 they came to Bloomington settling on the place [that is] now Alma Findlay’s. In the year of 64 Nov 11 grandmother had a baby boy named David Dillie after the first Bishop or presiding Elder of Bloomington. The night the baby was born it snowed over a inch of snow on her bed. The baby caught cold & died next morning. Grandfather moved his family back to Hyde Park when grandmother died at the age of 68. Grandfather moved to Elkhorn, Malad, Idaho and took up land.

Mother came to Bloomington and lived with her sister Mrs. Josephine Nelson. When twenty she married to father Niels Madsen. They both came over the plains. There was a great deal of sickness. Father had a brother, Franklyn, buried on the plains aged 2. They came with oxen teams it was slow traveling. Mother had to walk a lot of the way [she was] only 4 years old, but had to lighten the weight as much as they could. She said she couldn’t walk very far at a time. Her mother thought it would help both the oxen and herself. There wasn’t so very much to burn or make fires so they had to gather almost every dry thing they could, even buffalo chips. Their drinking water was bad. They met with some Indians at different places, but had no trouble.

When mother had been married 12 years father sold out and went to Dingle, Idaho. There we lived for ten good years. Mother was a woman to stay home and take care of her family & help others. I remember when Mrs. Oakey died how mother would have them [children?] come over every Saturday night and give them their bath and the father took care of them. The oldest girl [was] 9 [years] of age.

Mother was so good to those in trouble. [I] often remember how she would have cripples drive up to the back door with their horse and buggy and she would go out and give them their dinner when we had our trashing done. When tramps came she always helped them and the Indians, she never turned one away without bread. They all seemed to want bread or rutabagas.

I remember several of my playmates were at the east of our house pulling weeds when we saw a buck Indian going by on a pony. How we did run and get to the neighbor place just in time for Molly Bird was all alone.  All he would ask her was where her folks was and she would answer him gone k not, meaning gone away. He had a large hunting knife and was eating a large rutabaga. He finally went away, but he would keep a watch about the place. We thought he was looking for her folks, but they were gone to Montpelier. There used to be so many Indians go through Dingle each summer.

I found a Short History of Dingle, Idaho. Apparently hundreds of Indians used to camp in Oakey's (same Oakey that grandma Hazel talked about) grove as they traveled between Fort Hall and a reservation in .  Chief Pocatello even traveled with them.