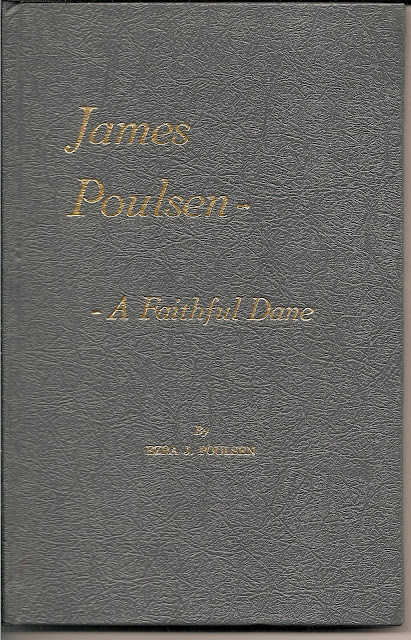 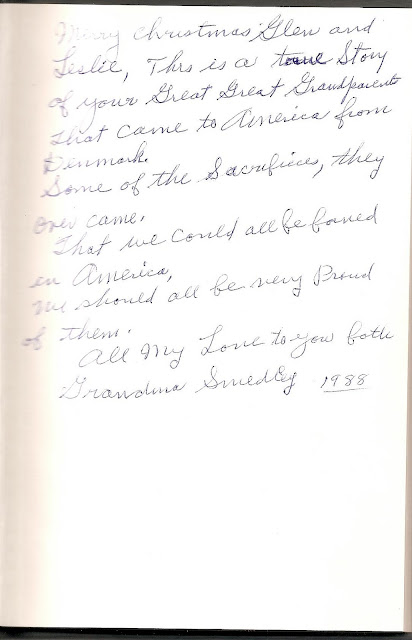 This is another book that my great-uncle Ezra wrote.  It is about James Poulsen, my 2nd great-grandfather.  My grandma gave it to me (and then husband) for Christmas in 1988.
I want to share a paragraph from chapter 13 entitled INCIDENTS REMEMBERED on page 63.

Anecdotes concerning James Poulsen as an individual have accumulated through the years.  He was camping one night with a group of people somewhere between Paris and the lower valleys, when an event occurred which revealed his temperament in a surprising manner. In those days of wagon travel, certain favorable camping places where there was water and wood, would often be crowded with travelers, some going one way, some another.  As one might expect, there were all kinds--Mormons, non-Mormons, good, bad, and indifferent.  On such occasions, it was customary to sit around a central fire and spin yarns or swap experiences.  Sometimes, a fast talker might capture the audience, as one did on the particular night, and get rather loose and abusive with his language. James, who usually had little to say, listened for awhile, becoming first disgusted, then angry, when the speaker made some offensive remarks. Finally, he sprang to his feet, grabbed the loquacious man by the collar of his hickory shirt, and shook him furiously, after which he threw him back to the ground, and ordered him to keep his mouth shut. Needless to say, the conversation was rather slow after that, and the party soon crawled into their blankets for the night. It has been said that this same man later camped on Sager's Creek; but when he discovered he was on Poulsen's land, he immediately moved camp. 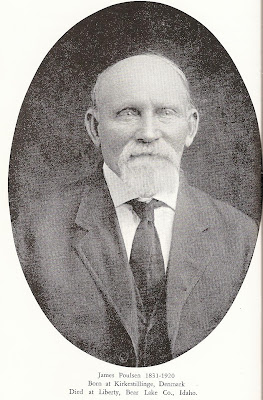