Today's treasure is a letter that was included in the box of great-grandma's stuff. 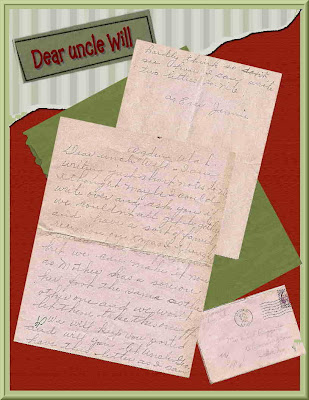 The letter was written to my great-grandpa Piggott by his niece Jennie Hess when she was about 14 years old.  I actually knew her as my friend's grandma.
It was around 1970 when mom and dad moved us to the new house.  That's when we discovered that the parents of the neighbor kids up the street were both related to my mom.  It took me quite a while to get the exact relationship straight.  Their mother's father and my mother's mother were first cousins, and their father's mother and my mother's father were first cousins. (confused Yet?)
The letter reads so:

Ogden, Utah
Dear uncle Will - I am
writing just short notes tonite.
I thought maybe I could
write over and ask you if
we couldn't all get to gether
and have a sort of family
reunion on xmas I thought
I could take the folks out
but we can make it now
as mother has a sore on
her foot the same as the
other one and we won't
let them take this one off.
We will keep you posted
and will you let uncle Geo.
have this letter as I can
hardly think so don't
see how I can write
two letters to-nite.
as Ever  Jennie

Now that I have scanned this letter I am seriously thinking about surrendering it.  I will be going to Idaho and thought that one of Jennie's grandchildren would appreciate having this.