This gal in a booth at the Bargain House of Fleas had a photo album with post cards, greeting cards, and photos. She was only selling them by the piece so I looked through the album until something reached out and grabbed me. This is what grabbed me: 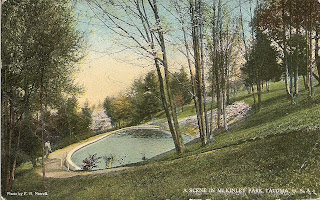 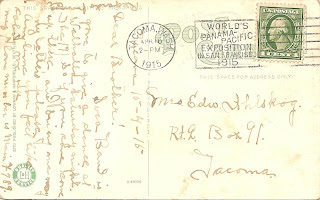 The pretty picture is what caught my attention, but it turns out that Mr. Ahlskog is an interesting fellow.

It took me a little bit to decipher some of the letters, but I finally did it. Here is a transcript of the correspondence:

Dear Brother!
Svea Band is
gone to give a dance at
Wallawalla Saturday night.
The 19 so if you can come
up there and bring me
my letters please.
Any time you feel like
calling me up
my phone number is Main 7989.
Regards from Olive.

Edward was born 5 Jun 1883 in Mustanssari, Finland and died Aug 1966 probably in Port Angeles, Clallam, Washington. He married Regina Swenn Thorsen 1 Dec 1924 in
Clark County, Washington. According to the World War I Draft Registration Edward was the carpenter at the Barbare Brothers Shipyard. The draft card also mentions his sister Olive, but I have not been able to find anything on her.

As far as I can tell, Edward had only one step son.

Apparently Edward was in this Svea band and I found a picture of him.
Here is Svea Band outside building in Tacoma . Edward is the one on the end.

Maybe there is an Ahlskog family member out there somewhere who would enjoy this family treasure.
Posted by Leslie Ann at 12:18 PM